How to add or remove a field from a Mongo collection without breaking the production?

Changing the schema of a Mongo collection is a common request for developers. We need this when the business evolves: we need to add new fields or remove existing fields from a target Mongo collection to better support different use-cases. Nevertheless, this is a risky operation, it may trigger an incident or outage when this is not handled correctly. In this article, we are going to what can go wrong, how to change the schema safely, and how to investigate if things go wrong. This article assumes that you are familiar with the basic concepts of MongoDB and uses Jackson as the serialization framework for your Java application.

This article is written with MongoDB 4.2, Jackson 2.12, and Java 11. But the concepts are not tight to these versions and should be valid for older versions. Now, let’s get started!

What can go wrong when adding a new field?

If a new field is added in the Java class without changing the existing documents in MongoDB, the deserialization can be completely broken. This is because the new field required by the Java class does not exist for those documents. Deserializing them can trigger an UnrecognizedPropertyException by Jackson Object Mapper.

Here is an example called OrderV1. The 1st version of the order contains 3 fields: the object ID in MongoDB, the customer ID, and the amount of this order. Recently, the product owner wants the possibility to cancel an order, so we need a new field “isCanceled” to support this use-case as OrderV2. Also, the product owner wants us to add an operator to keep track of the person who handles the order. The changes look pretty simple:

But you will see that there are some major risks here.

Without changing existing documents in MongoDB, the deserialization of the new fields may be set to null. This is the case for the new field operator. This is because the field operator does not exist for those Mongo documents. In Java, having a field with a null value can trigger NullPointerException and break your application. You need to either handle the null case in your Java code; or perform data migration in Mongo, i.e. adding the missing fields for your existing documents. We will talk about these tricks in detail in the following sections.

Another risk is about reverting the changes. Without additional configuration in the Jackson object mapper or your value class, you may not be able to roll back your changes once they are deployed to production. Once the Java changes are reverted, the deserialization of the new documents from MongoDB to Java will fail with the following exception:

This is because new documents have the field “isCanceled” but the old value class OrderV1 does not know how to deserialize it! This is so dangerous, we rolled back, but the production is on fire, exceptions are everywhere. But how to avoid this from happening? We will discuss it in detail in the “Preparing For Rollback” section.

Now we have a better understanding of how adding new fields may impact our production, it’s time to see how to improve the situation using different techniques.

To prevent NullPointerException, we can fill the missing data in Java by providing a default value. There are 4 ways to do that:

However, be careful when choosing the adjective used for the new information. You should ensure that false has the correct meaning for documents missing that field. For example, if you are adding a field to represent the visibility of an object, you have two choices: isHidden or isVisible, which one should you use? You should probably choose the adjective isHidden rather than isVisible because, for existing Mongo documents, they don’t have the field for visibility. In this case:

So isHidden is a better choice here.

Another way is to handle to null in the constructor of the value class. Therefore, when the deserialization happens, Jackson uses the constructor as the JSON creator to create the Java instance, and the null case will be handled properly.

Let’s take a real example. Given a document in Mongo collection without the new field operator:

Then during the deserialization, this is considered as null by Jackson, but then fall back to “support@example.com” in the constructor: 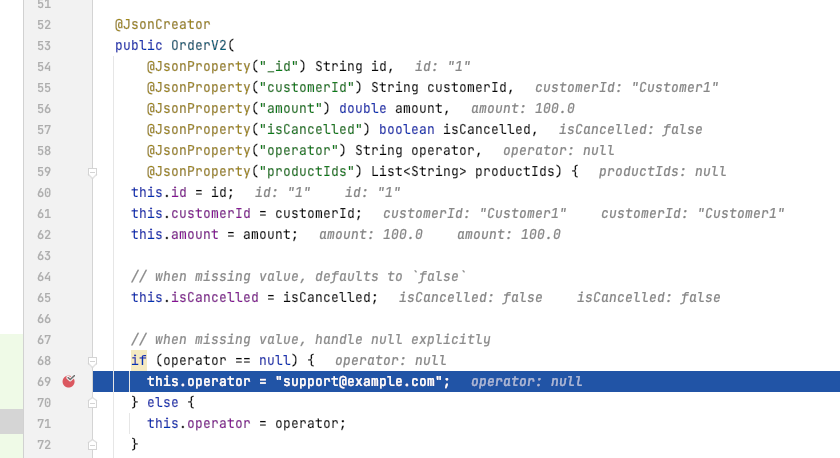 In a similar approach, you can also handle null in the getter method.

Another solution is to use Optional, combined with Jackson module Jdk8Module to serialize and deserialize it correctly. You can visit GitHub project https://github.com/FasterXML/jackson-modules-java8 or read the article “Using Optional with Jackson” in Baeldung to learn more about it.

To better simulate the changes, you can write some unit tests to test different behavior. I am not recommending you to write tests to cover all the cases, that will be very time-consuming. I am just trying to share different testing techniques to demonstrate that it is possible to assert in some way.

One possible test is to ensure that you can serialize a document into MongoDB, deserialize it back in Java, and the restored Java instance is equal to the original one.

Another possible test is to test that deserializing an old Mongo document into Java using the new schema (new Java class) will work as expected.

Because your Java class is changed (added new fields), you cannot use it to create the same structure as it was before. To simulate the existing Mongo documents, you can create a Mongo document using org.bson.Document:

In the example, we created a BSON document without the new field isCanceled in the test. It simulates the existing Mongo documents created before the schema change. It allows us to assert the deserialization and ensure that the restored document contains the values that we expect.

This sounds a bit overkill to me. Testing in staging is probably enough. But if you want to do this, it’s possible as well.

You can copy the existing Java class into a new class, such as LegacyOrder.java or OrderV1.java. Then, write an instance V2 into MongoDB and read it back as V1 (legacy) format to assert if the result is what you expect.

Besides providing a default value during the deserialization, another possibility to avoid the NullPointerException is to migrate the existing documents in MongoDB. Before doing so, consider:

Now, back to the Mongo query for migration. This can be as simple as:

In the query above:

How to handle an unknown field in Jackson?

In the previous section “Potential Risks”, we mentioned that rolling back to the previous version in Java application may not be possible. The deserialization of the new documents in MongoDB may fail with the following exception:

This is because new documents have the field “isCanceled” but the old value class OrderV1 does not know how to deserialize it! In this section, we are going to see how to handle unknown fields correctly in Jackson.

Make the Jackson object mapper more lenient face to unknown properties during the JSON deserialization by disabling the feature FAIL_ON_UNKNOWN_PROPERTIES. We can do that using one of the following lines:

This will apply to all the JSON objects deserialized by this object mapper.

Make the Jackson object mapper more lenient for a given value class during the JSON deserialization by adding annotation @JsonIgnoreProperties in your value class:

This will apply to all the JSON objects deserialized into this value class OrderV1. Compared to setting the feature globally, setting it locally at the class level gives you finer control about the behavior over different classes, but it’s also easier to forget adding this annotation because you will have to do that for all the classes and bring inconsistency over the deserialization behavior.

Once you configured one of the features mentioned above (globally or locally), then it should be safe to rollback! Hopefully, you won’t need to rollback, but it’s always a good idea to know that your code is prepared for that.

In the previous sections, we were focused on how to avoid breaking the schema in the first place. But what if the production is already broken? Maybe someone else didn’t realize his changes can trigger an incident. Therefore, it’s always a good thing to learn some basic Mongo queries to prepare the worst case. That is, fixing the production when it is broken. Here are some Mongo queries that I prepared for you.

Count the number of documents in the collection orders. Useful to understand how many documents are concerned and the potential impact if things go wrong.

Find out 10 documents without the field isCanceled and print them in pretty format. Useful to inspect the JSON before or after the actual update.

Remove field isCanceled from all the documents having this field. Useful for reverting the changes. Especially when your Java code had been rolled back to the previous version but the Jackson fails to deserialize the recently-added Mongo documented, which contains the new field isCanceled.

In the sections above, we mainly discussed what happened when adding a new field in MongoDB. But what about other scenarios?

There are eventually other scenarios that I didn’t mention. Please leave a comment so that everyone reading this article can learn about that.

How to go further from here?

In this article, we saw the potential risks for MongoDB when adding a new field in the Java application (NullPointerException and issue for rollback), the different techniques for filling the null value, how to write unit tests, how to migrate the existing documents, how to prepare for rollback by handling unknown field correctly via object mapper or via Java class annotation, and some useful MongoDB queries to help you investigate the incident when something goes wrong. Finally, we discussed briefly other scenarios and saw some resources about how to go further from here. Interested to know more? You can subscribe to the feed of my blog, follow me on Twitter or GitHub. Hope you enjoy this article, see you the next time!