The “Snapshot and Restore” feature is an important part of an Elasticsearch cluster. Its existence provides a strong guarantee for data reliability. That’s why we are interested in learning more about it. In this article, let’s take a look at different official snapshot repository plugins in Elasticsearch.

Before getting into details, let’s first understand what is a snapshot repository. There are two types of snapshot repositories: local repository and remote repository. The local repository is mainly used for testing (for unit testing or when trying out Elasticsearch in localhost), and it does not make much sense to use it on production. In production, we mainly use a remote snapshot repository because it can store cluster data outside the cluster as data backup. There are four official plugins: AWS, GCS, Azure, and HDFS. Among them, AWS, GCS, and Azure are the three plugins that I had used in the past two years, and they are also the main subject of discussion today.

Plugins can be installed via the command line elasticsearch-plugin (Official Document):

For the plugin to be used normally, the plugin must be installed on each node of the cluster. The four plugins mentioned above are all official plugins of Elasticsearch. You don’t need to download them, just install them directly. After a successful installation, the node needs to be restarted for the plugin to take effect.

In the storage method, using the storage system of a specific cloud service means that you need to configure and manage the corresponding storage, such as creating and setting service accounts.

Above we mainly looked at general information about snapshot repository plugins in Elasticsearch. In the following paragraphs, I want to take you into the code and read together a few representative classes.

The abstract class BlobStoreRepository is the base implementation of a snapshot repository, with works with any blob store implementation. This class has only two abstract methods: createBlobStore() and basePath(). The method createBlobStore() can be used to create a blob store, and it is recommended to implement with lazy initialization. Blob store is responsible for creating, reading, updating, and deleting data (CRUD) towards to cloud provider in Elasticsearch. We will analyze it further later. Another method is basePath(), which obtains the relative storage path of the Elasticsearch snapshot repository in the storage bucket of the cloud provider. If one bucket is used for one single repository, then the base path should be /. If one bucket is used for multiple repositories, or being used for other data-stores (not only for Elasticsearch), then you need to fill in the relative path where your Elasticsearch snapshot repo is located.

Blob store mainly provides two functions related to blobs: obtaining the blob container of a given path and obtaining statistics on the count of operations that have been performed on this blob store. For some plugins, the logic of adding, deleting, modifying, and checking blobs is also written in the implementation of blob stores, such as the blob stores Azure and GCS.

A blob container refers to the container that contains all blobs under a certain path. It does not contain logic related to snapshots, but it is more inclined to the bottom layer of the cloud provider. It is mainly responsible for adding, deleting, modifying and checking blobs under a given path, represented as BlobPath. Here are some of its methods: 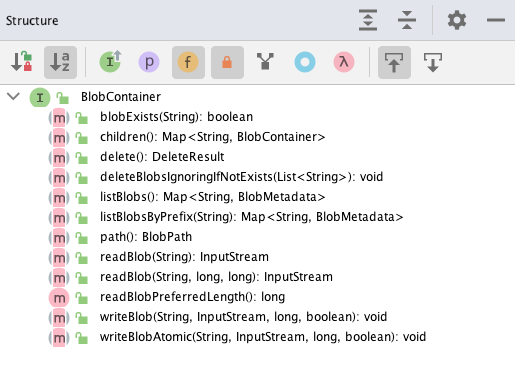 As mentioned in the previous paragraph, for some providers, the logic of adding, deleting, modifying, and checking blobs are not directly done in this class, but are delegated to the blob store, like the implementations of Azure and GCS. However, the CRUD operations of S3 are implemented in the class S3BlobContainer. So I feel that the boundary between blob store and blob container is not clear. But one thing is for sure: there is only one blob store in a repository and a repository may have many blob containers.

Now we understand different classes, let’s take a look at how the snapshot is created inside a snapshot repository, starting from the class BlobStoreRepository. The diagram below is generated by the third-party plugin “Sequence Diagram” in IntelliJ IDEA. To simplify the description, some steps are omitted. 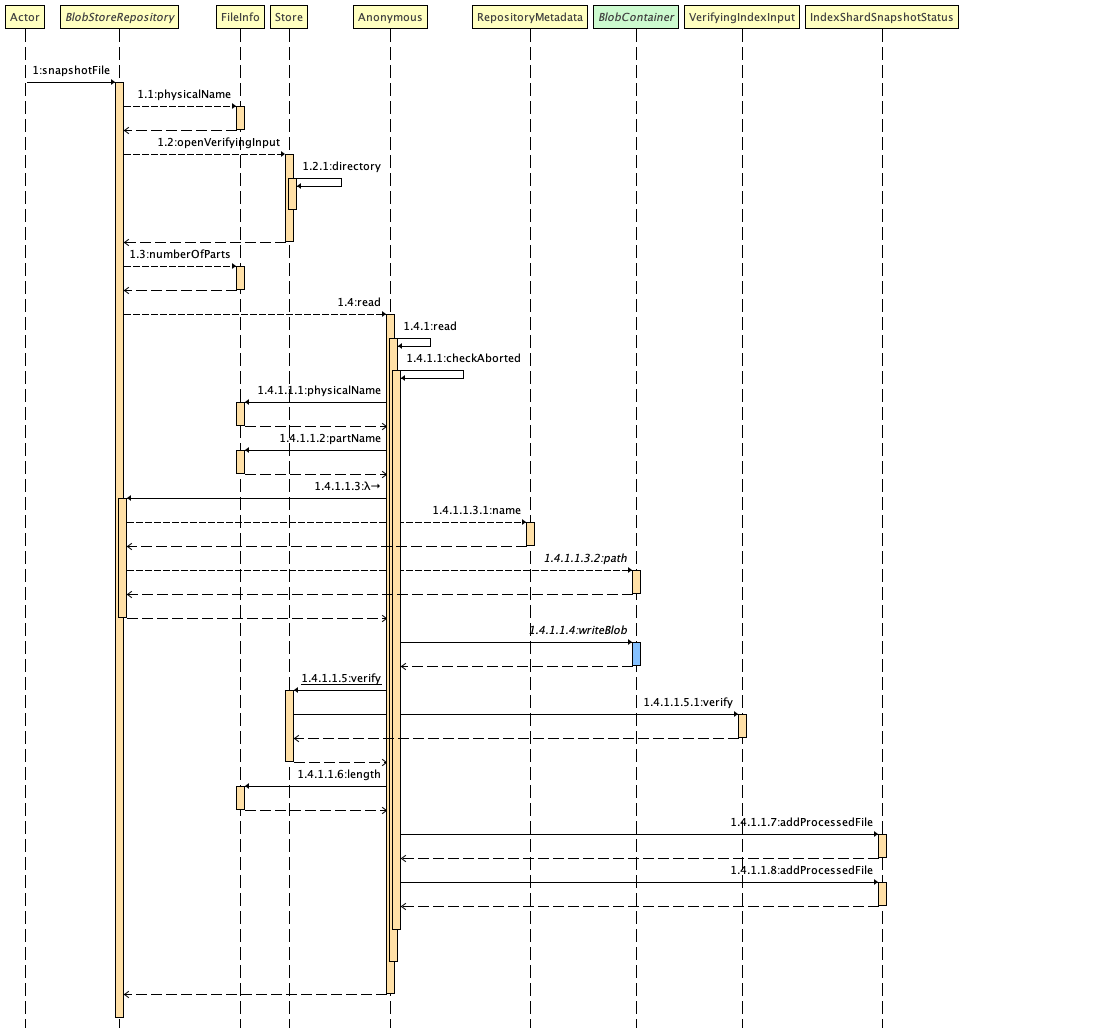 In this figure, we can see that the method snapshotFile of BlobStoreRepository first finds the file name (1.1) of the file to snapshot, then verifies the correctness of the file (1.2), and then for each part of the file (1.3), it performs un upload. When uploading, Elasticsearch uses a custom input stream wrapper to achieve potential rate-limiting. The latter part of the Sequence Diagram plugin seems to be incorrect, it writes the wrong serial number. But the flaws are not concealed, the next step is to write the blob, which is the blue part in the figure (1.4.1.1.4). Write the blob and forward it to the BlobContainer implementation. BlobContainer is an interface that has different implementations depending on the cloud provider. After the implementation is completed, BlobStoreRepository checks the correctness of the written data. Finally, the repository adds the successfully created snapshot to the status IndexShardSnapshotStatus to track the progress of the snapshot creation.

Due to time constraints, we have to stop here for the source code analysis.

How to go further from this article?

In this article, we saw how to install plugins for different cloud providers through elasticsearch-plugin; the impact of different plugins on the snapshot operations; after using the snapshot plugin, the dependency between the Elasticsearch cluster and the cloud provider; next, we walked into the source code, briefly analyzed the logic of three classes: Blob Store Repository, Blob Store, and Blob Container. We also snapshot creation as an example to understand how Blob Store Repository communicates with Blob Container. Finally, I also shared some resources to allow you to go further from this article. I hope this article can give you some thoughts and give you a better understanding of the “snapshot and restore” feature in Elasticsearch. If you are interested in knowing more information, you can subscribe to the feed of my blog, follow me on Twitter or GitHub. Hope you enjoy this article, see you the next time!