Today, I would like to share how to configure your Java project with Maven and Sonar, a powerful tool for continuous code quality analysis. After reading this article, you’ll understand:

Introduction of SonarQube and SonarCloud

SonarQube provides the capability to not only show health of an application but also to highlight issues newly introduced. With a Quality Gate in place, you can fix the leak and therefore improve code quality systematically. Sonar code analyzers are equipped powerful path sensitive dataflow engines to detect tricky issues such as null-pointers dereferences, logic errors, resource leaks…

They have also an online version, Sonar Cloud, which allows you to upload the analyse result without hosting the SonarQube server yourself. Here’s an example coming from my own project “Alumni Server”:

There’re 2 parts that we need to configure in Maven:

In the Maven <pluginManagement> section, we need to configure the default behaviors of Sonar plugin, meaning that we define the version used, the goal binding of Sonar scanner. Binding sonar:sonar to verify helps us the facilitate the code analysis: sonar will be executed any Maven command in which phase verify is included. In the same time, we also define JaCoCo, a Maven plugin for detecting the test coverage of unit tests and integration tests, using respectively the goals prepare-agent and prepare-agent-integration. Test coverage report will be generated by goal report.

In the Maven <profile> section, create a new profile for Sonar code analysis. You need to define certain Sonar analysis parameters, in order to match your SonarQube instance requirements.

Once every configuration is ready, you can run Sonar code analysis alongside with all the tests as following in your local machine, where SONAR_LOGIN_TOKEN is the authentication token of a SonarQube user with Execute Analysis permission:

In my case, it seems that I must let sonar to execute with the tests, so that Java code coverage plugin JaCoCo can analyse the test results correctly. Otherwise, the code coverage will be 0.

The next step is to configure Sonar analysis on Jenkins. The goal is to integrate Sonar as part of the master job. In order to do that, you need to have a Sonar token for Jenkins. Once you have done this, you need to modify your job as follows: 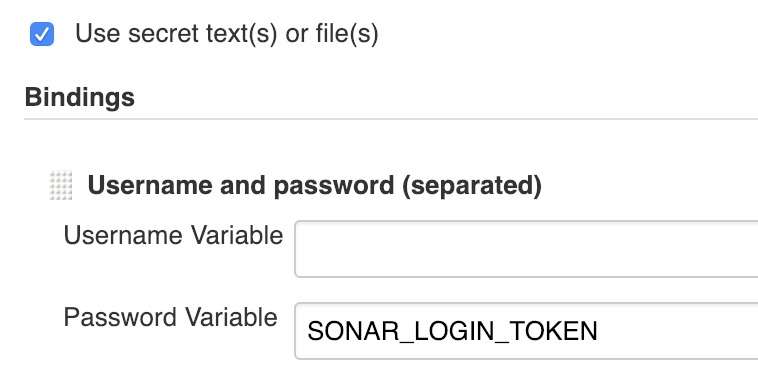 Now, your Jenkins job is ready. After running the job once, you should be able to see your code analysis on Sonar cloud. Notice that, if the target project does not exist on SonarCloud and the token has enough permission, SonarCloud will create the project after the first analysis report upload. Else, you need to ask the organization admin to create it for you on SonarCloud.

It’s preferable to use a machine account to upload code analysis via Jenkins. Before uploading, ensure that the machine account has enough permission to do it. In other words, this account need to be a member of the target organization.

Sometimes you might want to suppress Sonar warnings in a specific scope. It allows to disable inappropriate analyze results.

Suppress all warnings at one line:

Now we’ve successfully configured the Sonar scanner in Maven for the first analysis. As for the next steps, I think you might be interested in:

They’re the future topics that I might be presented in my blog. Thanks for your attention. Please stay tuned!