Recently I was developing a search solution for my blog to improve the search experience, based on Java and Elasticsearch. Before using it in production, I want to set up a monitoring system to better understand what happens. As a Datadog employee, I naturally chose Datadog as the solution because I have been using it for several years now. This article mainly explains how I set up the whole system. Hopefully, it will be useful for you as well. Please note that this is NOT an official guide from Datadog. It’s simply a side project that I did in my free time.

Currently, I am running my project in Alibaba Cloud inside a Linux server (Ubuntu), inside which there are mainly two Docker containers: one for the Java application for search and the other for Elasticsearch. After reading this article, you will understand:

This article does not aim to be exhaustive. Instead, it provides a high-level overview and tries to give you a big picture. Now, let’s get started!

Before adding integrations, the first step is to sign up for a trial account in Datadog so that you can create credentials (API, APP keys) for the integrations, and also have the detailed instructions for different integrations inside Datadog’s Web Application. Compared to the static documentation, the hints and commands there are more adapted to your need, where API key is prefilled and the Datadog site (US, EU, …) is prefilled.

Datadog has documentation about Alibaba Cloud Integration and a blog post “Monitor Alibaba Cloud with Datadog” to help understand why the integration is beneficial for you. Following that documentation page will allow you to access metrics to different services, such as Alibaba Elastic Compute Service (ECS), Server Load Balancer (SLB), ApsaraDB RDS, ApsaraDB for Redis, Content Delivery Network (CDN), Container Service, Express Connect.

Setting up the integration is pretty simple, you need to: 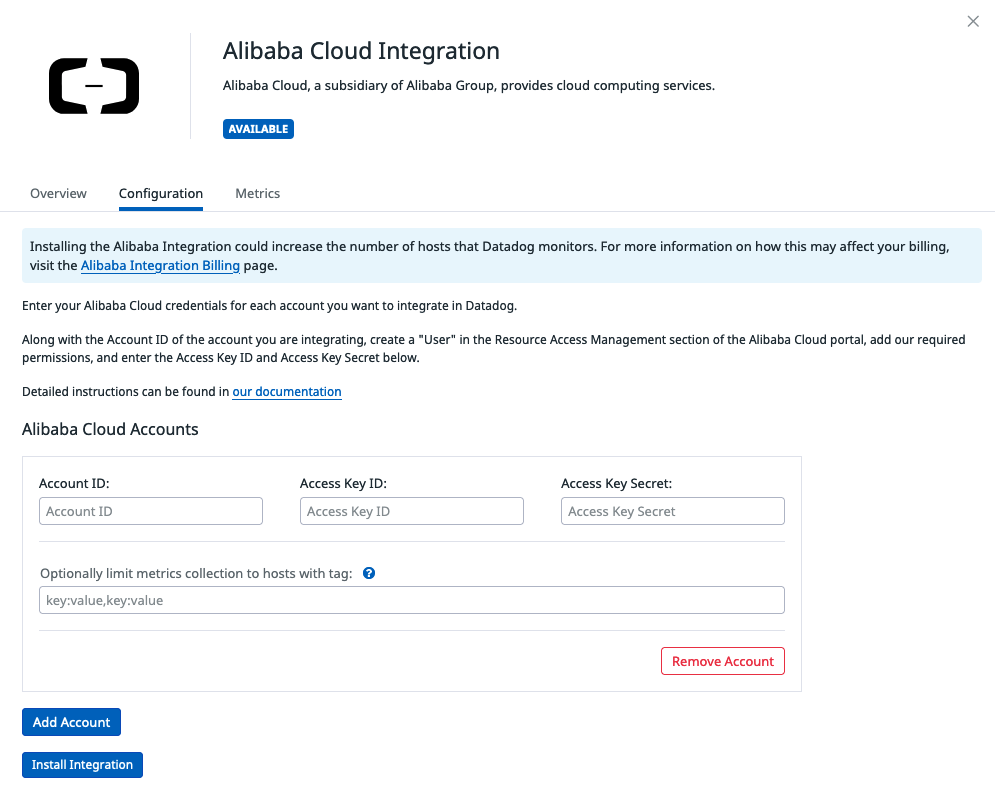 The previous section focus on the cloud provider level. And now it’s time to go further into the host level. Since I am running two services, my Java app and Elasticsearch, in Docker, I believe that there are two options to monitor them: using either the Datadog agent at the host level or as a Docker container.

In the beginning, I chose the first option because I imagine that it can capture more information about the host such as the Linux Kernel, disk, systemd, etc. Also because I can configure the agent easily (through the files inside /etc/datadog-agent/conf.d/). However, it didn’t work as expected. It failed to monitor Docker since the socket is hard-coded to unix:///var/run/docker.sock, but my Docker engine did not use that endpoint. It is using unix:///run/user/1000/docker.sock since I am running Docker in rootless mode (see “Run the Docker daemon as a non-root user (Rootless mode)”). I kept seeing errors:

By consequence, I fell back to the second option, where I started Datadog agent in Docker mode. Here is the command I used for starting the Docker container:

And here is the explanation of these options:

Once the Datadog agent is up and running, it can detect all the services running in the host and provide hints on the Datadog website. In my case, it detects 3 services: Docker, Elasticsearch, and SSH. 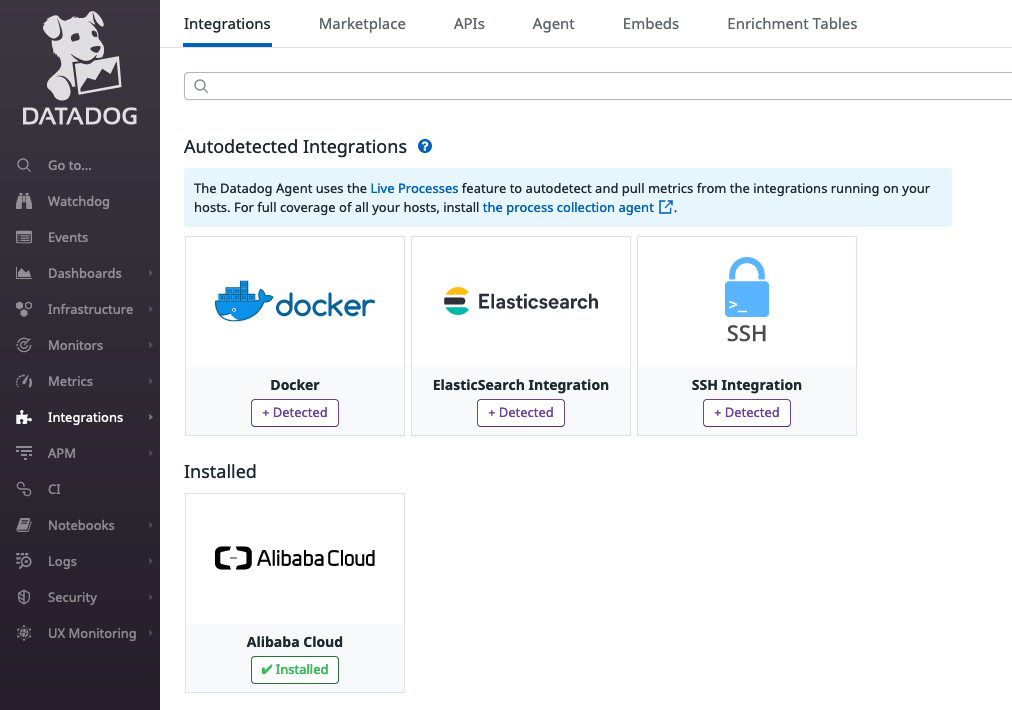 Now, it’s time to configure services correctly (Elasticsearch and my application Java). The easiest way to do this is to rely on the autodiscovery mechanism provided by Datadog. With Autodiscovery, the Agent detects if it’s running on Docker and automatically searches all labels for integration templates. These labels can be defined in Dockerfile, docker-compose.yaml, when running the Docker container (docker run), or inside Docker Swarm. You can learn more about this in the article Docker Integrations Autodiscovery. We will see concrete examples in the sections below.

As you can see, I used multiple labels for the Datadog autodiscovery (ad), for the check, the configuration, and the logs integration. After restarting the Elasticsearch container with these Datadog labels, Datadog agent was able to configure everything. I saw the dashboard and logs in Datadog. 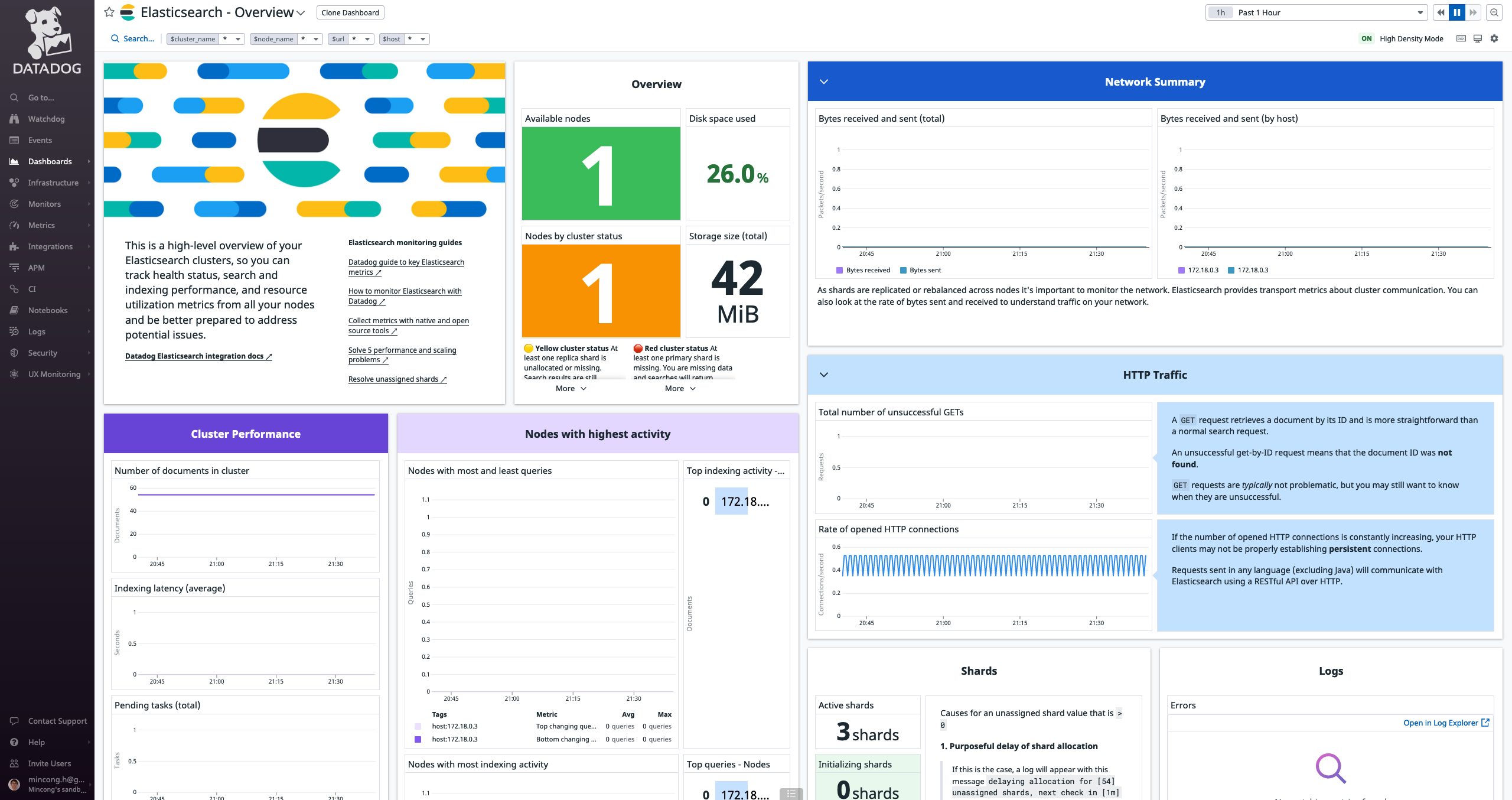 Currently, my Java application does not have any custom metrics. So this section is focused on collecting logs. My application is built using Maven and Logback, so I am going to write how to configure them. Datadog has a page “Java Log Collection”, which explains how to configure logs under different logging frameworks (Log4j, Log4j2, and Logback), using JSON or raw format. In my case, I used JSON format as suggested by the documentation. As you may know, Logback does not have built-in support for JSON logging. So I used the logfellow/logstash-logback-encoder to provide the JSON logs, as suggested by the doc. This means declaring a dependency on the encoder and using it inside Logback’s file appender.

I didn’t completely follow Datadog’s guide because I want to see the logs in both the file and the console. Then, when starting the Java Docker container, I also added some labels for autodiscovery:

and we can see that the logs are collected successfully:

Then I want to go one step further: I want to enable the Application Performance Management (APM) as well. Because it gives teams the insight they need to identify areas in need of optimization and prioritize tasks effectively. Datadog has a page for Getting Started With Tracing, there is also custom quick start instructions within the Datadog website for the best experience. Below, I am using the Datadog-website version to enable APM step by step, where I can choose the environment, host configuration, language, and Datadog will generate commands for me. 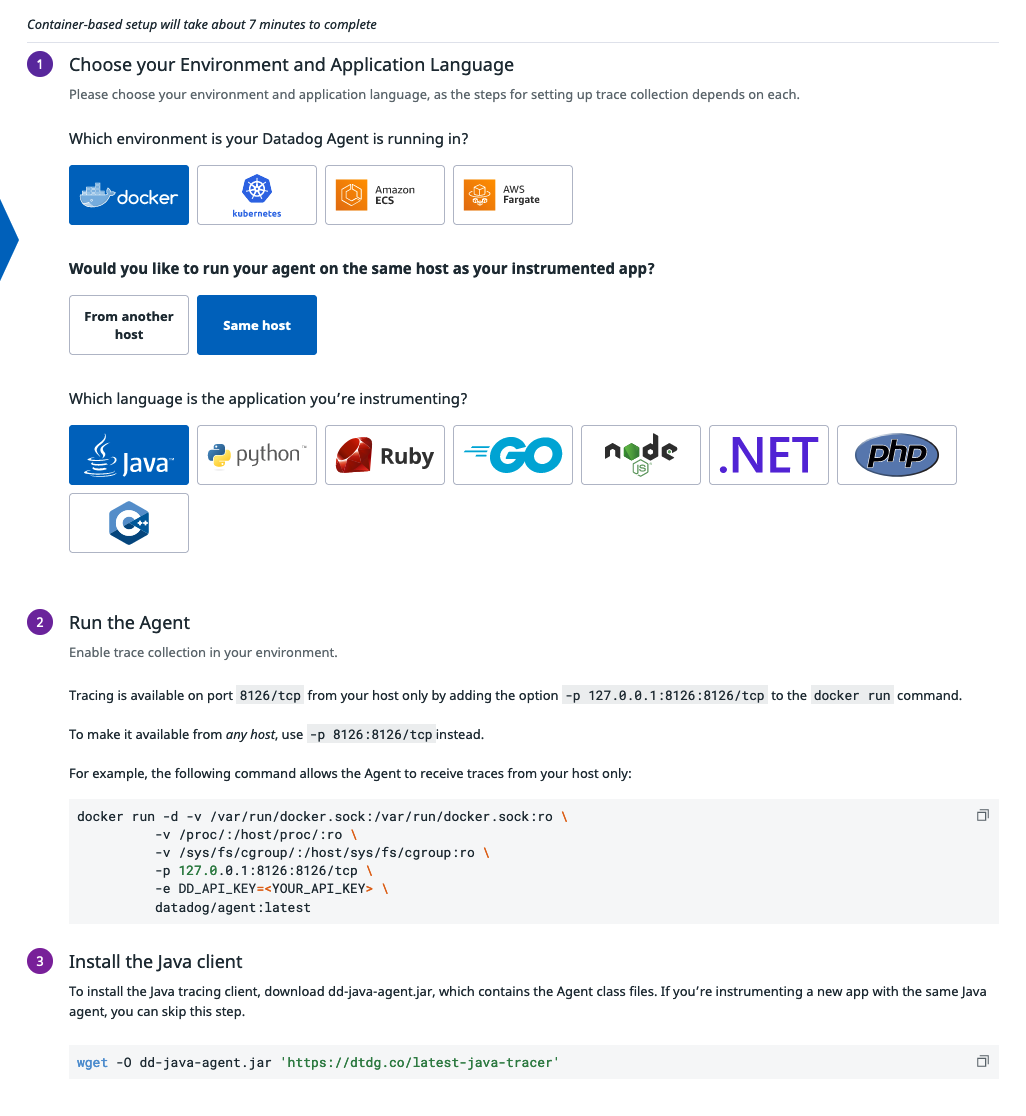 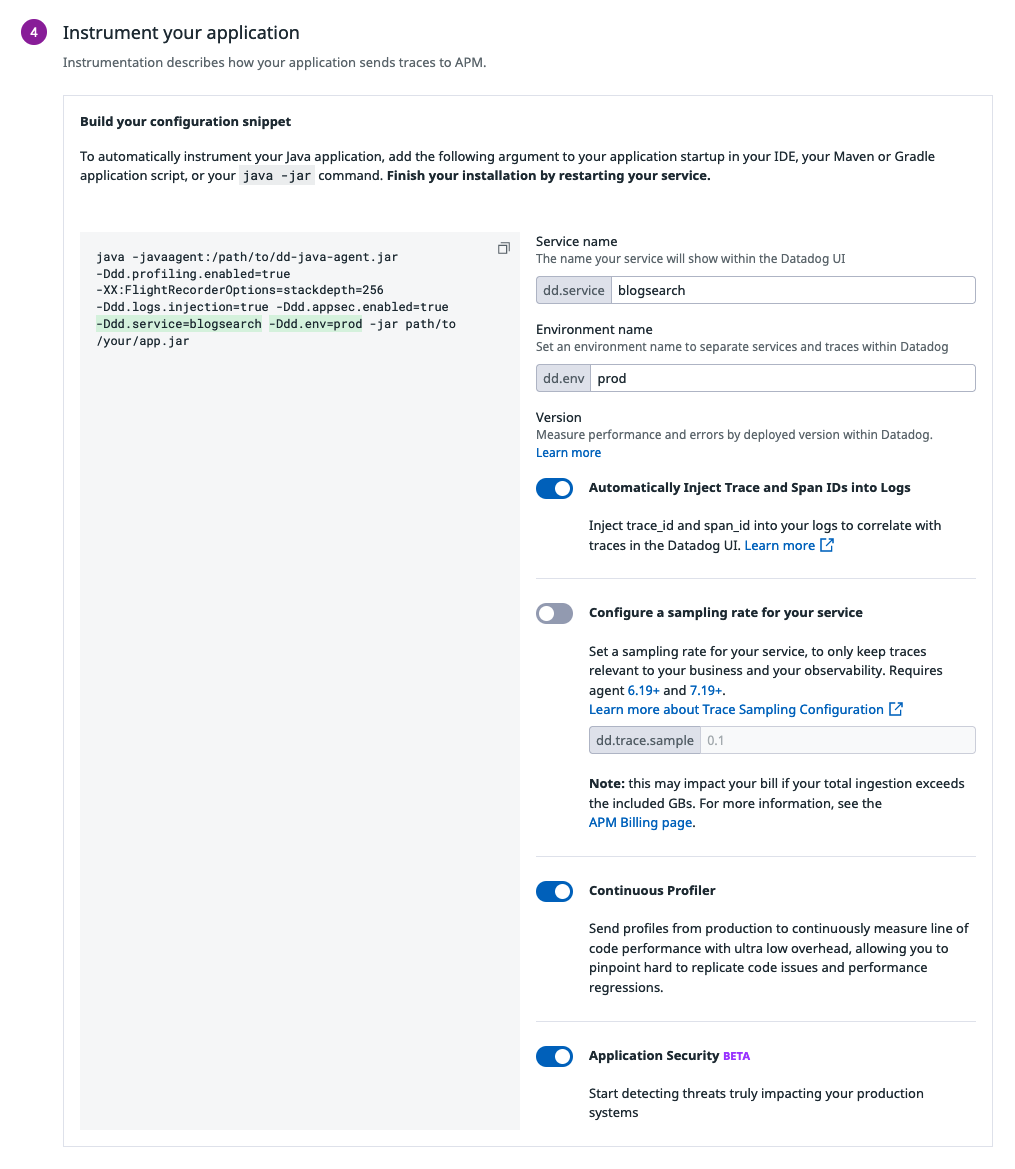 Most of the things went smoothly. The only problem for me was that I chose the wrong option in the “same host” part and I didn’t receive any traces in Datadog Agent. I should have chosen “From another host” as different containers (Java app, Datadog agent) were running in different containers. Concretely, it means that we need to configure the applications and Datadog agent a bit differently:

On the Datadog agent side, the start-command looks like this:

On the application side, I need to:

Once these are done. I also added the tracer in Elasticsearch, it mainly means:

After all these efforts, we can see the traces in Datadog’s website:

For Java applications, the profiling can be done via Continuous Profiler. The profiler is already included inside the Java tracer, so we just need to enable it:

Once it is enabled, we can see the profiling data on Datadog’s website: 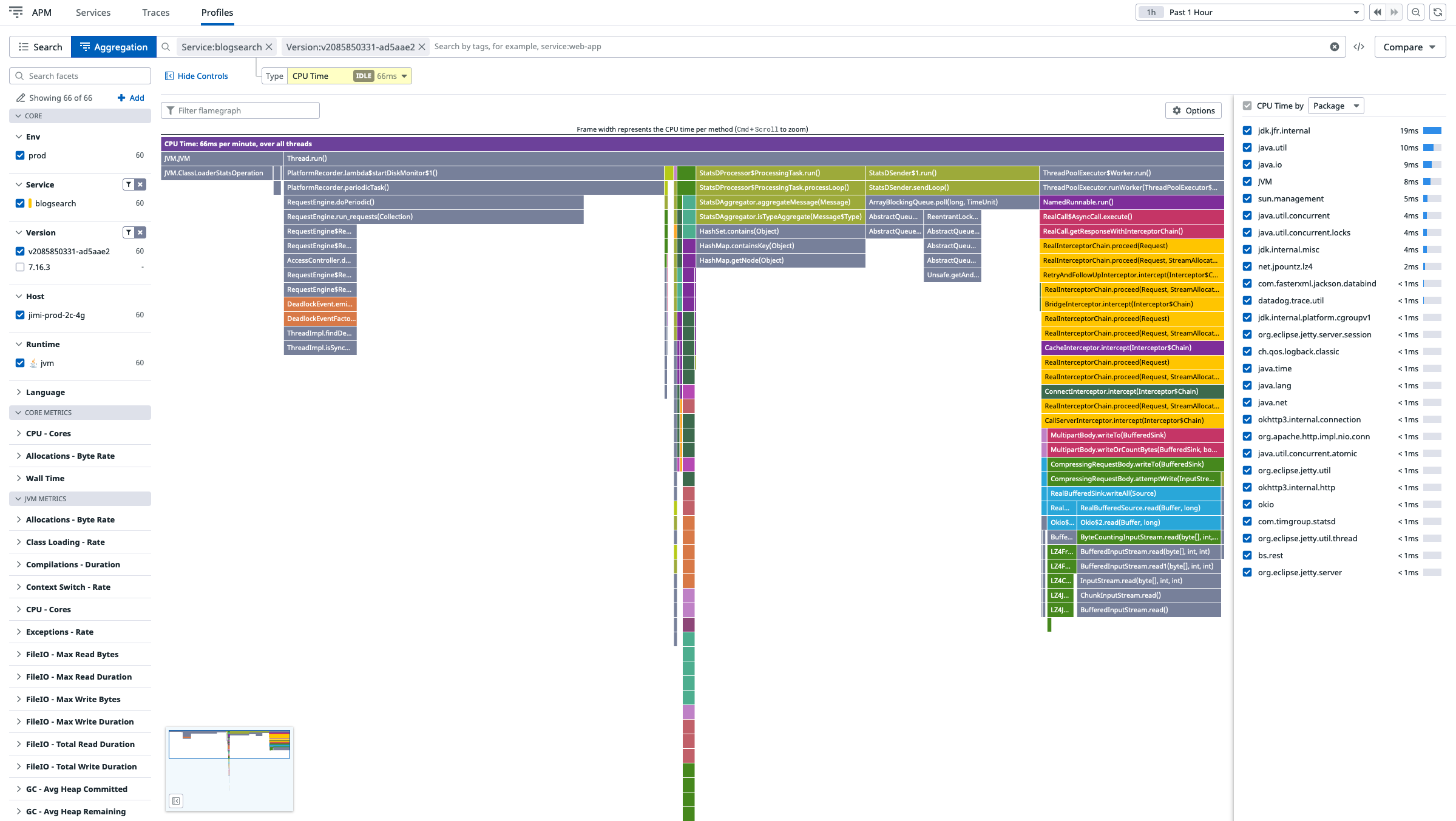 By the way, if you have a security manager enabled, you will probably need to grant more permissions to the tracer JAR:

How much will it cost for a normal customer?

I am lucky enough to be a Datadog employee so that the data above is free, but I want to know what will it cost for normal customers. Out of curiosity, I decided to following the pricing and do an estimation.

In this article, we saw how to collect metrics and logs from the cloud provider (Alibaba Cloud), from Elasticsearch, and from Java application through autodiscovery using Datadog agent. We also saw how to enable APM and profiling. Interested to know more? You can subscribe to the feed of my blog, follow me on Twitter or GitHub. Hope you enjoy this article, see you the next time!